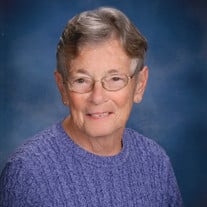 Carol Kay Miller, age 82, of Greeley, Kansas, passed away on Saturday, June 12, 2021, at the Ted Hersey House in Leawood, Kansas. Carol Kay Root was born on May 13, 1939, in Kansas City, Missouri. She was the youngest of three daughters born to Walter Roscoe and Hallie Gwendolyn (Sturgeon) Root. Her father worked for the railroad and the family lived in California and Osawatomie before moving to Greeley. When they were moving into their Greeley home they were helped by the neighbor boy Chuck Miller. Carol graduated from Greeley High School with the class of 1957. On June 14, 1958, Carol married the neighbor boy Charles "Chuck" Miller, at St. John's Catholic Church, Greeley, Kansas. Chuck and Carol began their married life in Kansas City, Kansas, returning to Greeley in 1968. Chuck and Carol were blessed with six children: Ellen, Mike, Theresa, Deb, Mark, and Diane "Dink". Carol enjoyed singing in the choir at St. John's Catholic Church, where she was an active member. She enjoyed traveling with family, especially to softball games and tournaments. She loved spending time with family and friends; her grandchildren and great grandchildren were especially dear to her heart. Carol was famous in her family for her flannel shirts, embroidered tea towels and her cinnamon rolls. When Carol was unable to remain in her home, she was blessed to be able to spend her final two years at the Ted Hersey House. Carol's family wishes to thank the wonderful care staff for the love and attention she received. Carol was preceded in death by her husband, Chuck on September 14, 2013; her parents; and two sisters, Betty Lewis and Dorothy Lickteig. Carol is survived by her children, Ellen Miller of Lincoln, Nebraska, Mike Miller and wife, Cathy of Lee's Summit, Missouri, Theresa Miller of the TED Shed, Debbie Day and husband, Matthew of Greeley, Mark Miller and wife, Amy of Greeley, and Diane Miller of Lincoln, Nebraska; five grandchildren, Amanda, Noah and wife, Tia, Zach, Maggie and Katy; three great grandchildren, Gabe, Sebastian and Navia. Mass of Christian Burial will be held at 11:00 AM, Friday, June 18, 2021, at St. John's Catholic Church, Greeley, Kansas. Burial will follow in the St. John's Catholic Cemetery, Greeley. The family will greet friends at the St. John's Hall following a 7:00 PM Rosary on Thursday evening at St. John's Catholic Church. Memorial contributions may be made to St. John's Church Building Maintenance Fund and left in care of the funeral home. Condolences may be sent to the family at www.feuerbornfuneral.com.

Carol Kay Miller, age 82, of Greeley, Kansas, passed away on Saturday, June 12, 2021, at the Ted Hersey House in Leawood, Kansas. Carol Kay Root was born on May 13, 1939, in Kansas City, Missouri. She was the youngest of three daughters... View Obituary & Service Information

The family of Carol Kay Miller created this Life Tributes page to make it easy to share your memories.