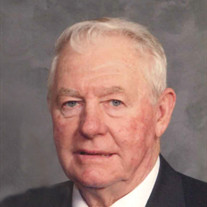 Carl L. Stanley, age 89, of Iola, Kansas passed away at his home on Saturday, December 5, 2020. Carl Lewis Stanley was born on July 30, 1931 at Fort Scott, Kansas. He was the second of two sons born to Fred and Edith (Heckenliable) Stanley. Carl grew up on his family's farm near Elsmore, his family later moved to a farm west of Moran. He graduated from Moran High School with the class of 1949, before attending Allen County Junior College, where he played football for two years. On November 8, 1953, Carl was united in marriage to Mary Ellen Murrow in the Moran United Methodist Church. Their union was blessed with one son, Steve, and four daughters, Carla, Connie, Paula and Vickie. Carl and Mary Ellen first made their home on a farm southwest of Bronson, later moving to their farm west of Moran. In 1967 they moved to their farm south of Gas, where they lived for 42 years. Carl was a third-generation farmer, raising grain and cattle. He began working with his father and grandfather as a young boy. Farming was Carl's occupation and his hobby, he loved the farm and sharing the farm life with his children and grandchildren. After retiring from farming they moved into Iola in 2008. In his free time Carl loved water skiing and especially teaching his children to ski when they were young. Carl enjoyed spending time with his friends, some of his favorite activities included playing cards and shooting pool. He also enjoyed hunting quail and pheasant. In his retirement Carl busied himself with countless puzzles, sharing many of them with his family. He was a 50-year member of Masonic Lodge, he was also a member of the Mirza Shrine, Pittsburg. Carl will be remembered as a devoted husband and father; his jokes will be missed by those who knew and loved him. Carl was preceded in death by his parents; grandson, David Lewis Stanley; and his brother, Jimmie John Stanley. He is survived by his wife of 67 years, Mary Ellen of the home; his children and their families, Carla Hunt and husband, Ken of Iola, Steve of Iola, Connie Rourk of Iola, Paula Wachholtz of Panora, Iowa, and Vickie Weilert and husband, Tim of Chanute, Kansas; 13 grandchildren; 17 great-grandchildren; two great-great-grandchildren; sister-in-law, Jeannie Stanley of Prescott, Arizona; and many nieces and nephews. Due to Covid-19, attendance to the services for Carl will be limited to immediate family only. The services will be available for viewing via livestreaming at 2:00 PM, Wednesday, December 9, 2020 for additional family and friends. Carl will lie in state at the funeral home on Tuesday from 8:00 AM to 5:00 PM for friends who would like to pay their respects. Memorial contributions may be made to the Shriners Hospitals for Children or to the Kappa Alpha Sorority and left in care of the funeral home. Condolences may be left at www.feuerbornfuneral.com.

Carl L. Stanley, age 89, of Iola, Kansas passed away at his home on Saturday, December 5, 2020. Carl Lewis Stanley was born on July 30, 1931 at Fort Scott, Kansas. He was the second of two sons born to Fred and Edith (Heckenliable) Stanley.... View Obituary & Service Information

The family of Mr Carl Lewis Stanley created this Life Tributes page to make it easy to share your memories.

Send flowers to the Stanley family.