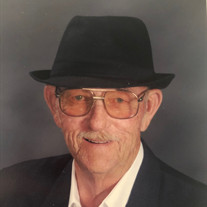 Carl M. Letsinger, age 84, passed away Thursday, August 12, 2021, at Windsor Place in Iola, Kansas. Carl was born July 29, 1937, to Herman Alva and Doris Pauline (Bauer) Letsinger in Iola, Kansas. He was the first to admit he could cause trouble and buck authority more than just about anyone. He made the decision to leave school before graduating. But he was able to find focus and purpose in the US Navy, serving proudly on the amphibious force command ship USS Mount McKinley, where he was able to travel the world. He had the tattoos to prove it. He also pursued his education and proudly obtained his GED. He received an honorable discharge in August of 1958 and came back to Iola. In 1959, he met a pretty cosmetology student, Barbara Sinclair at the local skating rink. They fell in love and were married on June 10, 1960. In the 1970's, Carl became Deputy Sheriff in Allen County, a job he loved and took great pride in. He loved taking care of his community and made many lifelong friends along the way. He later worked at Gates Rubber Company for 19 ½ years before his retirement in 1999. Many who were youngsters at the time will most remember Carl for his work in security at the local skating rink. It was his way to immerse himself in the lives of his daughters, and all the people of the community - young and old - who frequented the rink. You would know Carl was around if you saw or heard his latest touring motorcycle. He rode until he just couldn't anymore. He definitely loved people, and people loved being around Carl as well. During his lifetime, he was a member of the VFW in LaHarpe, and was a member of the Masonic Lodge. You could always find him fishing when he had a chance, or at least talking about fishing. And last, but not least, he had a love for animals. His darling Brandy was with him until the end. Carl is preceded in death by his parents, Herman "Hump" Letsinger and Pauline (Bauer) Letsinger Stokes, as well as two sisters, Anita Letsinger Clay, formerly of Lenexa, Kansas, and Janice Letsinger Hayter, formerly of Lee's Summit, Missouri and Amarillo, Texas. He is survived by his wife, Barbara Letsinger, and two daughters, Marla Letsinger Lang of Piedmont, South Carolina, and Carla Letsinger Wachter of Houston, Texas. He has three grandchildren, Devin Nicole Wachter, Andrew Joseph (AJ) Wachter, and Hyland Sophia Wachter, all of Houston, Texas. One sister, Karen Johnson and her husband Terry, survive and reside in Iola. Services to honor Carl's life will be held at 10:00 am on Thursday, August 19, 2021, at Feuerborn Family Funeral Service in Iola, Kansas. Burial with military honors will follow at Highland Cemetery in Iola. Family will greet friends from 6:00 to 8:00 pm on Wednesday, August 18, 2021, the night prior to the funeral service. The family of Carl would like to encourage anyone attending the services to wear a mask to protect everyone as they grieve the loss of their loved one. Memorials in honor of Carl are suggested to the Allen County Animal Rescue Facility (ACARF) and may be left with the funeral home or mailed to 1883 US Highway 54, Iola, Kansas 66749. Condolences for the family may be left online at www.feuerbornfuneral.com.

Carl M. Letsinger, age 84, passed away Thursday, August 12, 2021, at Windsor Place in Iola, Kansas. Carl was born July 29, 1937, to Herman Alva and Doris Pauline (Bauer) Letsinger in Iola, Kansas. He was the first to admit he could cause... View Obituary & Service Information

The family of Carl M. Letsinger created this Life Tributes page to make it easy to share your memories.

Send flowers to the Letsinger family.