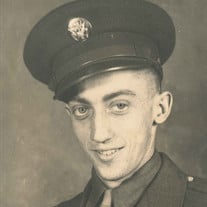 Calvin Lay, age 95, of Iola, Kansas, passed away on Monday, January 18, 2021. Calvin was born September 24, 1925, in Hope, Kansas, to John Lay and Mildred (Rubin) Lay. Calvin grew up in Hope and graduated from Hope High School. After high school, Calvin entered the United States Army and served our country from 1943 to 1946. After World War II, he attended Brown Mackie College in Salina, Kansas. While there, he met his wife Evelyn Hoffman of Kanopolis, Kansas, and on September 6, 1947, they were married. Calvin moved to Iola, Kansas, in 1970 and was the manager of Gibsons Discount Center, which was later known as Pamida. He retired in 1990. Calvin loved to bowl and participated in many bowling tournaments around the Iola area. He and Evelyn loved to travel the country on bus tours and were active members of a local square dance group. He also loved gardening. Calvin was a member of the Lions Club. Calvin is survived by his wife, Evelyn, of the home; four children, Susan Martin and husband, Harold, Carlton, Kansas, Kathy Chard and husband, Gordon, Iola, Kansas. Randy Lay and wife, Joyce, Ottawa, Kansas, Vicki Williams, and husband, Marion, Olathe, Kansas; ten grandchildren, and fourteen great-grandchildren. A visitation will be held from 1:00 p.m. to 2:00 p.m. on Friday, January 22, 2021, at Feuerborn Family Funeral Service, 1883 US Highway 54, Iola, Kansas. A funeral service will follow at 2:00 p.m. in the chapel at Feuerborn Family Funeral Service. Burial will be in Highland Cemetery, Iola, Kansas. Memorials are suggested to Wesley United Methodist Church or Carlyle Presbyterian Church, and may be left with Feuerborn Family Funeral Service. Condolences for the family may be left at www.feuerbornfuneral.com. Masks are required for all persons attending the visitation and funeral service.

The family of Calvin D. Lay created this Life Tributes page to make it easy to share your memories.

Send flowers to the Lay family.