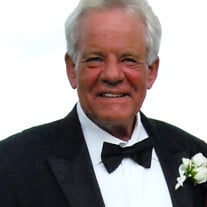 Byron Lloyd Heckman, born February 27, 1952, to Lloyd and Charlotte Heckman in Ft. Rucker, Alabama, passed away peacefully in Midvale, Utah, on Tuesday, September 7, 2021, at the age of 69. He lived in Iola, Kansas, for many years. Byron will be remembered for his humor, kindness, love for life, and love for his children and grandchildren. His will, determination and love for life leave a lasting legacy for all who knew and loved him. Byron grew up on the family farm in rural South Branch Township, Watonwan County, Minnesota until his family move to Ft. Madison, Iowa, in December of 1967. Grandpa and Grandma purchased a motel there that they managed and operated for 4 years. Following that the family moved to Faribault, Minnesota in 1971. Byron attended St. John's Lutheran Parochial school from grades K-8. Activities that he participated in during his youth - 4-H, (for four years brought livestock to county and state fair), football, choir, wrestling, and baseball. He attended high school both in Ft. Madison, Iowa and St. James, Minnesota, graduating from St. James in 1970. Following graduation, Byron furthered his education and attended a heavy equipment operator school in Florida as well as auto/diesel mechanic school in Canby, Minnesota. He eventually followed his passion to serve our nation and go to sea. Byron served with distinction as a Quartermaster on the USCGC Mellon (Pacific), USCGC Mariposa (Great Lakes) and USCGC Sledge (Chesapeake Bay) before retiring from the United States Coast Guard in 1996. In retirement, he returned to his roots; working alongside his daughter, son-in-law and five of his grandchildren tending to their family farm near Iola, Kansas. He is preceded in death by his father, Lloyd Heckman, and mother, Charlotte Heckman. He is survived by his sons, Robert Heckman of Chicago, Illinois, Shawn (Jennifer) Heckman of Draper, Utah, and Brian (Ashley) of Havre De Grace, Maryland; daughter, Jennifer (Michael) Blaufass of Westphalia, Kansas; siblings, Diane (Bob) Haugen of Red Wing, Minnesota, Jon (Mary) Heckman of Red Wing, Minnesota, Cindy (Dan) McCabe of Cleveland, Minnesota, Ellie (Ken) Zuehlke, of Loveland, Colorado, Edie (Dave) Kavanagh of Sioux Falls, Minnesota, and Emil Heckman of Perley, Minnesota. He also leaves behind twelve beloved grandchildren and many nieces and nephews. A visitation will be held from 6:00 p.m. to 8:00 p.m. on Wednesday, September 22, 2021, in The Venue at Feuerborn Family Funeral Service, 1883 US Highway 54, Iola, Kansas. Byron will be honored with memorial services and a full military funeral at a later date. Per his wishes, his ashes will be spread at sea by his children. Semper Paratus and rest peacefully.

Byron Lloyd Heckman, born February 27, 1952, to Lloyd and Charlotte Heckman in Ft. Rucker, Alabama, passed away peacefully in Midvale, Utah, on Tuesday, September 7, 2021, at the age of 69. He lived in Iola, Kansas, for many years. Byron will... View Obituary & Service Information

The family of Byron Lloyd Heckman created this Life Tributes page to make it easy to share your memories.

Send flowers to the Heckman family.