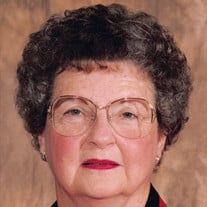 Betty Ruth Frazell-Moor of Overland Park, Kansas, age 92, passed away on May 18, 2021, at Sunrise Assisted Living. She was born to Dale and Wildis (Johnson) Erickson in Wilson County, Kansas, on October 6, 1928. She attended and graduated from Colony High School in 1946 and then attended Iola Junior College. Betty married Elmer Frazell in 1949. They moved to Pittsburg, Kansas where he attended Kansas State College of Pittsburg in 1952, they moved to Iola where Elmer taught at Iola Junior High and then became principal in 1966. Elmer passed away in 1976. In 1978, Betty was employed by Bumgardner Optometry and then by Dr. Robert Smith, O.D. Upon her retirement in 1995, she married William D. Moor. In 2011, she moved to Overland Park to be closer to her family. Betty was a member of Calvary United Methodist Church, Iola Virginia Circle Music Club, Iola BPW, Daughters of the Nile, Beta Sigma Phi of Iola and the Sorosis Club. She served in many capacities at her church and also sang in the choir. She was preceded in death by her first husband of 27 years, Elmer, her second husband of eight years, William; her parents, Dale and Wildis (Johnson) Erickson. Betty leaves behind and will be missed by Steve Frazell and wife Deb, of Olathe, Kansas, Mike Frazell and wife Maureen of Overland Park, Kansas; five grandchildren; three step-grandchildren; and 11 great grandchildren. Thank you to Sunrise Assisted Living Facility of Overland Park and the staff at Ascend Hospice for their loving care. Graveside services will be held at 2:30 p.m., on Monday, May 24, 2021, at the Highland Cemetery, Iola, Kansas. The family will greet friends from 1:00 p.m. to 2:00 p.m., Monday, at the Feuerborn Family Funeral Service Chapel, 1883 US Hwy 54, Iola. Memorial contributions may be made to Wesley United Methodist Church, 301. E. Madison, Iola, Kansas, 66749, or can be left in care of the funeral home. You may send your condolences to the family at www.feuerbornfuneral.com.

Betty Ruth Frazell-Moor of Overland Park, Kansas, age 92, passed away on May 18, 2021, at Sunrise Assisted Living. She was born to Dale and Wildis (Johnson) Erickson in Wilson County, Kansas, on October 6, 1928. She attended and graduated... View Obituary & Service Information

The family of Betty Ruth Frazell-Moor created this Life Tributes page to make it easy to share your memories.

Send flowers to the Frazell-Moor family.