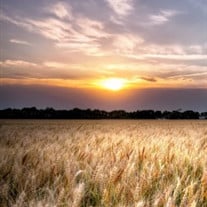 Benedict E. Yoder, Sr., age 95, of Garnett, Kansas, passed away on Monday, February 7, 2022, at Coffey County Hospital, Burlington, Kansas. He was born February 2, 1927, in Hydro, Oklahoma, the son of Ezra J. and Jemima (Mullet) Yoder. Benedict married Elizabeth W. Miller on June 24, 1951, in Amity, Oregon. Later that year, they moved to Garnett, Kansas, where they spent the remainder of their years. They celebrated 70 years of marriage last June. This union was blessed with seven children. Benedict is survived by his wife Elizabeth Yoder of the home; five children, Edward Ray Yoder and wife Gertie of Arthur, Illinois, Marvin B. Yoder and wife Leah of Broken Arrow, Oklahoma, Lydia Kauffman and husband Willard of Arcola, Illinois, daughter-in-law, Lucy Yoder of Garnett, Kansas, Nelson Yoder and wife Erma of Norwood, Missouri, Ben Yoder Jr. and wife Mary Susan of Welda, Kansas, and daughter-in-law, Eileen Yoder of Garnett, Kansas; 22 grandchildren; 37 great grandchildren; and one great-great granddaughter; one sister, Lena Miller of LaGrange, Indiana; two brothers, Jonas Yoder of Goshen, Indiana and Ezra Yoder Jr. of Hutchinson, Kansas. He was preceded in death by his parents, Ezra and Jemima Yoder; two sons, Andy B. Yoder on February 7, 2016, Leslie B. Yoder on January 25, 2011; one great granddaughter, Emily Diane Mullett on October 28, 2014; one brother, Andrew Yoder; two sisters, Alma Hershberger and Katie Hershberger. He always had a friendly smile and a welcome greeting to everyone he met. Benedict loved putting jigsaw puzzles together and doing crossword puzzles with his family. He loved playing games with the family. Benedict was a dairy farmer and was very devoted in giving his cows the best care. The family wishes to thank the community, family, and everyone for their prayers, condolences and support during this time. Funeral services will be held at 9:00 AM, on Friday, February 11, 2022, at the Amish Community Building, 18240 NW 1800 Rd, Garnett, Kansas, with burial to follow in the Amish Cemetery. The family will greet friends at the Amish Community Building on Thursday afternoon, February 10, 2022, from 2:00 PM to 4:00 PM and from 6:30 PM to 8:30 PM. You may send your condolences to the family at www.feuerbornfuneral.com.

The family of Benedict E. Yoder, Sr. created this Life Tributes page to make it easy to share your memories.