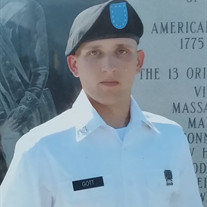 Austin Lawrence Gott passed away in Iola, Kansas, Thursday, May 27, 2021. Austin was born June 30, 1994, in Chanute, Kansas. He proudly served in The US Army 2011 through October of 2016, where he was promoted to the Sergeant E-5. Austin was decorated with the Army certificate of achievement, Afghanistan Campaign Medal with Campaign Star, Army Accommodation Medal, National Defense Medal, Global War on Terrorism Service Medal, Army Service Medal, Overseas Service Medal, Military Outstanding Volunteer Service Medal. He served in a designated imminent danger pay area while serving in Afghanistan from July 1, 2014 thru February 10, 2015. While serving in the US Army, Austin was stationed in Fort Benning Georgia, Fort Lee Virginia, Fort Hood, Texas before serving in Afghanistan and returning to Fort Wainwright, Alaska. Austin had a true love of the outdoors, he especially enjoyed fishing and spending time with his family. Austin served as a volunteer firefighter for Killeen, Texas while stationed at Fort Hood. He also was proud to work for BNSF at Kansas City, Missouri as a Carman. He had many other skills that included working with his hands as welding, woodworking, remodeling, and working on anything with an engine. Austin leaves behind his mother and stepfather, Sandra and Jamie Mosbrucker, of St Joseph, Missouri; three siblings, Clinton Gott and Wendy, of Joplin, Missouri, Melissa Mccann, of Iola, and Kristen Jones and David, of Lawrence, Kansas; and stepmother, Bobbi Gott of Joplin, Missouri. Austin had many other relatives and his best friend John. He was preceded in death by his father, Larry Gott, grandfather, Robert Scantlin, grandmother, Juanita Dunlap, uncles Gary and Rusty Gott, and cousins, Taylor and Emily Sawyer. Inurnment with military honors will be held at 10:00 a.m., on Friday, June 11, 2021 at the Leavenworth National Cemetery. Condolences to the family may be left at www.feuerbornfuneral.com.

The family of Austin Lawrence Gott created this Life Tributes page to make it easy to share your memories.

Austin Lawrence Gott passed away in Iola, Kansas, Thursday, May...

Send flowers to the Gott family.