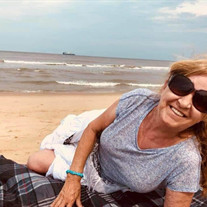 Arveca Rebecca Haberlein, age 67, of Garnett, Kansas, passed away on Wednesday, February 17, 2021 at Northpoint Skilled Nursing at Paola, Kansas. She was born August 17, 1953, in Kansas City, Kansas, the daughter of Godfrey and Mary (McGahan) Leonard.  Arveca graduated from Wyandotte High School and attended Johnson County Community College.   Chief “Charly” Arveca joined the Navy in 1971, and in 1979 was stationed in Norfolk, Virginia, under the Commander In Chief of the Atlantic Fleet. Rated as a Nuclear Weapons Statistician, a position that held Top Secret status, one of Charly’s responsibilities included having an infamous ‘Red Phone’ on her desk.  During this time, she was part of a team of four people that received a Letter of Appreciation for saving the Navy millions of dollars. We are unable to tell you exactly ‘how’ this occurred, due to it ACTUALLY BEING TOP SECRET!  Shortly after, in 1980, she accepted an assignment aboard the USS Canopus and became the first woman in the Navy to qualify as OOD (Officer On Deck) on a fast frigate. During her tour on the Canopus she again received a Letter of Appreciation, this time from the Marines for morale. She is also the only woman to join an Iron Man Competition. Charly’s unique service to our country has earned her 12 ribbons and medals; including two National Defense medals and a Global War on Terrorism Medal. The Army has also recognized the Chief’s amazing multi-talents by awarding her the Army Appreciation Medal for her volunteer work in Iraq, where she put together a library. She joined the Navy Reserves in 1991, and the National Guard in 1996. She retired in 2005 as a Chief Petty Officer, and is a member of both the VFW and The American Legion.  Her family is no stranger to military service. During WWII, Charly’s father served in the Army, as did her younger brother in Iraq. One son was in the Air Force, and his twin is in the National Guard and also served a tour in Kuwait. Arveca was preceded in death by her parents, Godfrey and Mary Leonard. Arveca is survived by her siblings; Jessie (Leonard) Fisher of Kansas City, Kansas and Steve Leonard of Colony, Kansas; her five children, Angela (Alonzo) Stout of Maryland, Arveca “Classie” McSwane of Osawatomie, Kansas, Sterling “Blaze” Haberlein of Wichita, Kansas, Shane Haberlein of Wichita, Kansas, and  Cody (Haberlein) Carlein of Topeka, Kansas; seven grandchildren; Allaire, Azillia, Druvyn, Ledaya, Tyrus, Bronen, Carsen. Memorial services will be held at 2:00 P.M., on Thursday, February 25, 2021, at Feuerborn Family Funeral Service Chapel, Garnett.   Memorial contributions may be made to the American Legion Fuller-Thompson Post#48 of Garnett, Kansas. You may send your condolences to the family at www.feuerbornfuneral.com.

The family of Arveca Rebecca Haberlein created this Life Tributes page to make it easy to share your memories.

Send flowers to the Haberlein family.