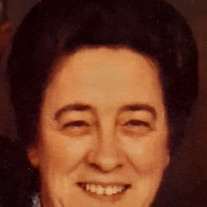 Anna "Ann" (Chupp) Yoder passed peacefully into the presence of Jesus from her room at the Rock of Ages Retirement Home in the late afternoon of May 21, 2021. She was 91 years old. Born in Holmes County, Ohio on May 11, 1930, Ann was the daughter of Andrew and Anna (Yoder) Chupp. As a young woman, she moved out west to Oregon. In November of 1948, Ann married Elmer Swartzentruber, who passed away a year later. Following Elmer's death, she met and fell in love with Joseph "Joe" Yoder, who had also lost his spouse several years earlier. The two were married on April 13th, 1952 in Amity, Oregon, and they enjoyed a marriage of over 55 years until Joe's passing on April 17, 2008. Ann enjoyed a full, long, impactful life. A lover of music, she sang in a quartet along with Joe in her younger years. More than anything, Ann loved her Lord and Savior Jesus Christ, and church ministry was incredibly important to her. She and Joe spent many years ministering to local communities and helping to establish new churches around Oregon. Ann also served as the President of the ministry "Women's Aglow" for a number of years. Combining her passion for ministry with a love of children, she and Joe later lived in Mexico for four years. There, they ran a Children's Home while also raising their own two sons. Ann was an excellent cook and baker, and following her return to the Willamette Valley from Mexico, she opened her own successful bakery, "Ann's Pie Kitchen", which operated in Newberg and McMinnville, Oregon. Most of all, Ann loved spending time with family - her husband, children, grandchildren, and great-grandchildren, and many extended relatives. She and Joe moved to Washington State around 1990, where she enjoyed living near both her sons and their families until she returned to Oregon two decades later following Joe's passing. She also greatly enjoyed gardening, quilting, sewing, and catching up with friends. Ann will be remembered as a loving wife, mom, sister, grandmother, great-grandmother, and friend. She exuded warmth but also had a memorable, endearing spunk. Her faith in the Lord Jesus gave her peace and a firm foundation throughout her whole life. She was cherished and will be missed by everyone who knew her. In addition to husbands Elmer and Joe, Ann was preceded into eternity by the following siblings: Rudy Chupp, Levi Chupp, Lizzie Chupp, Mattie Schrock, Millie Eicher, Drucilla Chupp, Dema Mishler, Emma Chupp, Benjamin Chupp, and Isaac Chupp. She is survived by her siblings Andrew Chupp and Katie Swartzentruber, and by her children, Ray (Sherie) and Craig (Charee). She is also survived by her six grandchildren Jessica (Jonathan), Joshua (Alyssa), Daniel (Kelsey), Tifini, Mikinzee (Joe), and Dalton, and her six great-grandchildren, Kaylee, Lori, Molly, Scarlett, James, and Ember. Ann's family would like to express their heartfelt thanks to the staff at Rock of Ages Retirement Home for their gentle and attentive care over the years. Funeral services will be held at the Mont Ida Church of the Brethren near Garnett, Kansas, on Memorial Day, Monday, May 31, 2021 at 10 AM. Interment will follow in the Amish Cemetery, Garnett. There will also be a future memorial service at the Rock of Ages, McMinnville, Oregon, date and time TBD. In lieu of flowers, donations may be made to Samaritan's Purse (https://www.samaritanspurse.org/. Condolences to thefamily may be left at www.feuerbornfuneral.com.

Anna "Ann" (Chupp) Yoder passed peacefully into the presence of Jesus from her room at the Rock of Ages Retirement Home in the late afternoon of May 21, 2021. She was 91 years old. Born in Holmes County, Ohio on May 11, 1930, Ann was the... View Obituary & Service Information

The family of Ann Yoder created this Life Tributes page to make it easy to share your memories.

Send flowers to the Yoder family.