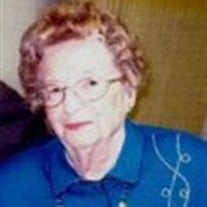 Alice Marie Leim, age 96, of Garnett, Kansas, passed away on Thursday, February 10, 2022, at Marantha Village, Springfield, Missouri. She was born January 18, 1926, in Garnett, Kansas, the daughter of Walker and Bessie Nichols. Alice graduated high school in Garnett in 1944. Alice was united in marriage to Loren Hinkle on October 25, 1947. They had one daughter, Mary Hinkle, born April 17, 1959. Both Loren and Mary preceded Alice in death. Alice was united in marriage to Carl Leim on March 31, 1995, at the First Christian Church in Garnett, where he and Alice were both members. Carl Leim preceded Alice in death on October 18th, 2010. Funeral services will be held at 2:00 P.M., on Friday, February 25, 2022, at the Feuerborn Family Funeral Service Chapel, Garnett, with burial following in the Garnett Cemetery. Memorial contributions may be made to First Christian Church in Garnett, Kansas. You may send your condolences to the family at www.feuerbornfuneral.com.

The family of Alice Marie Leim created this Life Tributes page to make it easy to share your memories.

Send flowers to the Leim family.