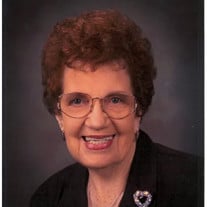 Alberta L (Bert) Searcy, age 95, was born on April 7, 1925 in Chanute Kansas, and peacefully went to our Lord on January 16, 2021, at Fresno Guest Homes in Fresno, California, the daughter of John and Hazel (Wilson) Beck. Alberta married Glen Searcy on October 22, 1944, and had a son J.R. During those years she was a farm wife, working part time at Trout's Ladies Wear. Later they moved to Hutchinson, Kansas, where she attended Adela Hale Business School and worked as a dental receptionist for Dr. Gail Allen. Later they moved to Topeka, Kansas, where she became a licensed prosthetics fitter and worked at Petro's Surgical Appliance until retirement and moving back to Iola, Kansas. She, being the type A personality, meant she had to keep busy at all times. During her retirement she served on the Allen County Hospital Board and was an active member in the Allen County Hospital Guild and the American Cancer Society. She was an active 50 plus year member of The Order of the Eastern Star, Salem Club, Daughters of the Nile, White Shrine, Methodist and EUB Church. Alberta was preceded in death by her husband of 64 years, Glen Searcy; parents, John and Hazel (Wilson) Beck; brothers, Thurman and Clifford Beck; sisters, Mary Smith, Myrtle (Becky) Stafford, and Vera Montgomery. She leaves behind and will be missed by her son, J.R. Searcy and wife Susy (Norton); granddaughters, Raquel and husband, Jim Crisp and Gerra Searcy; great-grandchildren, Garrett, Jarred, and Jack Crisp; Chase, Kiera, and Jenna Searcy. Thank you to Fresno Guest Homes and the staff at Bristol Hospice for the loving care through this time. A memorial service will be held at 10:00 a.m. on Saturday, March 13, 2021, in the chapel at Feuerborn Family Funeral Service, 1883 US Highway 54, Iola, Kansas. Inurnment will follow in Mount Hope Cemetery, Humboldt, Kansas. In lieu of flowers, remembrances may be made to American Cancer Society, Shriners Hospital for Children, or the charity of your choice. Condolences for the family may be left at www.feuerbornfuneral.com.

The family of Alberta L. Searcy created this Life Tributes page to make it easy to share your memories.

Send flowers to the Searcy family.