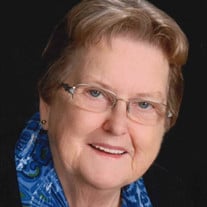 Agnes Madglena Lickteig, age 85, of Greeley, Kansas, passed away on Wednesday, October 14, 2020, at St. Luke’s South Hospital, Overland Park, Kansas. She was born on August 29, 1935, in Scipio, Kansas, the daughter of Edward and Madglena (Wolken) Rockers. She attended East Scipio School and graduated from Greeley High School with the Class of 1953. After graduation she worked at Mode O Day sewing factory in Ottawa. Agnes married Arnold Joseph Lickteig on October 11, 1954, in Scipio, Kansas. This union was blessed with seven children. She stayed home and raised her kids until the youngest started school. She then worked at the grocery store in Greeley, then later at the Greeley Café until retirement. She had a strong faith and was a member of St. John’s Catholic Church for 55 years. She also was a member of the St. John’s Altar Society. She led a blessed life and was a wonderful wife, mother, grandma, sister, aunt and friend. She loved everyone equally and will forever be remembered for her kindness, smile and compassion. The memories of our holidays at Grandma Aggie’s will be forever treasured in our hearts. Grandma had her way of doing the nicest things to brighten up our day. She was the most amazing person to us. She always put everyone before herself. Agnes was preceded in death by her parents, Ed and Lena Rockers; five sisters, LaVera Rockers, Florence Wolken, Elva Bradfield, Theresa Huff, Sister Martina Rockers; four brothers, Elmer Rockers, Kenneth Rockers, Raymond Rockers, and Dennis Rockers; two grandchildren, Timothy Jared Lickteig and Michelle Dawn Johnson; one great grandson, Gracien Edward Lickteig; one great granddaughter, Jordan Ann Lickteig. She is survived by her husband of 66 years, Arnold J. Lickteig, of the home; seven children, Leon J. Lickteig and wife Cindy of Greeley, Kansas; Donald M. Lickteig and wife Sandy of Hawk Point, Missouri; Brenda M. Johnson and husband Rick of LaCygne, Kansas; Shirley A. Rhynerson and husband Mike of LaCygne, Kansas; Connie C. Grosdidier and husband Linnie of Colony, Kansas; Joel E. Lickteig and wife Lesa of Winfield, Missouri; Brian M. Lickteig and wife Beth of Elsberry, Missouri; 21 grandchildren; 36 great grandchildren and (two on the way ); one great great grandchild, and (1 on the way); siblings, Martin Rockers of Greeley, Kansas; Hilda Lankard of Garnett, Kansas; one sister-in-law, Mary Ann Rockers of Greeley, Kansas; brother-in-law, Curtis Lickteig of Roeland Park Kansas; sister-in-law, Rosella Riblett and husband Loren of Salina Kansas; and numerous nieces, nephews and friends. Mass of Christian Burial will be held at 11:00 a.m., on Monday, October 19, 2020, at St. John’s Catholic Church, Greeley, with burial following in the St. John’s Cemetery. A Rosary will be held at 4:00 p.m., on Sunday afternoon at the Feuerborn Family Funeral Service, Garnett, with visitation following. Memorial contributions may be made to St. John’s Catholic Church. You may send your condolences to the family at www.feuerbornfuneral.com. The funeral mass for Agnes will be livestreamed via: https://zoom.us/j/7166693102?pwd=b1lsVDZuSkRHMXpodFJzTlRneWZUZz09 Meeting ID: 716 669 3102 Passcode: Lickteig Following the service the recording will also be made available on this page. Please call 785-448-5411 if you have any issues related to the livestream.

The family of Agnes M Lickteig created this Life Tributes page to make it easy to share your memories.