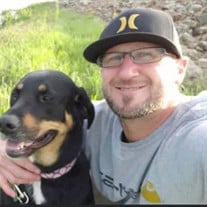 Aaron Christopher Thompson, age 43, of Gladstone, Missouri, formerly of Garnett, Kansas, passed away on Friday, October 1, 2021, at St. Joseph Medical Center, Kansas City, Missouri. Aaron was born on September 6,1978, in Garnett, Kansas, the son of Diana McIntosh and Robbie Thompson. Aaron graduated with the Class of 1997 from Anderson County High School. He joined the US Navy in 1999 and served until 2001. Aaron lived in Osawatomie, Kansas, where he met Natasha Ballou and to this relationship, their daughter, Briauna was born on July 10, 2002. In 2005 Aaron moved to Oxford, Alabama following the conclusion of his relationship, he worked for Hutch Touch, tinting car windows. Aaron later moved to Manhattan, Kansas in 2010 where he worked at Film at Eleven as a window tinting specialist. Aaron moved to Ottawa in 2013 and worked for Walmart Distribution Center for seven years. Aaron was currently working as a supervisor for Pure Fishing distribution center in Kansas City, Missouri. Aaron put his heart and soul in everything he did. Aaron was very loyal to his family and many friends and never met a stranger. He loved to live life to the fullest, as a young boy he may have been known as ornery, because he was. As he grew up he still kept some of that ornery but his heart was as big as his personality and there was nothing he would not do for anyone. He never let grass grow under his feet because he was always on the go. Aaron was always up for an adventure, he especially loved traveling the mountains. From an early age Aaron had a love for diving and aerial antics, he loved jumping and diving from cliffs. Aaron was an Alabama football fan, he loved watching every game and he especially loved attending the games. He also loved attending the races at Talladega while living in Alabama. He attended many concerts over the years, as he loved all kinds of music. Aaron's mom always knew when he was near her house because not only could she hear the music as he came down her street, but she could feel the beat moving through her house. His love, compassion, friendship, smile, laugh and presence will be missed. Aaron was preceded in death by his maternal grandfather, Robert McIntosh; his paternal grandfather, Roger Thompson; and his faithful dog, Roxie Ann. He is survived by his mother, Diana McIntosh of Ottawa, Kansas; his father, Robbie Thompson and stepmother, Robin of Bynum, Alabama; daughter, Briauna RaeLynn Thompson of Mission, Kansas; sister, Aimee Walker (David) of Olathe, Kansas; two brothers, Derek Thompson of Clarksville, Tennessee and David Thompson (Heather) of Garnett, Kansas; maternal grandmother, Wilma McIntosh (Clarence Hermann) of Garnett; paternal grandmother, Dixie Eggleston of Liberty, Missouri; six nieces, Madison and Hayden Walker, Aubrey, Avery, Allie and Hadley Thompson; numerous aunts, uncles, cousins and friends. Funeral services will be held at 10:30 AM, Wednesday, October 6, 2021, at the First Christian Church, Garnett, Kansas. Burial will follow in the Garnett Cemetery. Aaron's family will greet friends from 6:00 PM to 8:00 PM Tuesday evening at the Feuerborn Family Funeral Service Chapel, Garnett, Kansas. Memorial contributions may be made to the Franklin County Cancer Foundation or to Prairie Paws Animal Shelter. Condolences may be sent to the family at www.feuerbornfuneral.com.

The family of Aaron Thompson created this Life Tributes page to make it easy to share your memories.

Send flowers to the Thompson family.