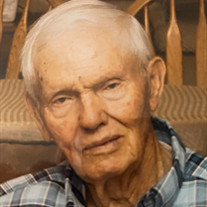 Aaron Hosley, age 94, passed away Tuesday, November 3, 2020 at Allen County Regional Hospital in Iola, Kansas. Aaron was born August 3, 1926 to John Russell and LouAda (Blunt) Hosley in Kincaid, Kansas. He graduated from Kincaid Rural High School before beginning his life-long career of being a farmer. Aaron married Sandra (Anderson) Hosley on July 6, 1952 in Mildred, Kansas. Their union was blessed with three children. Aaron’s father accepted his diploma from high school because Aaron had been drafted into World War II serving in Germany and France as the war ended. He was especially proud to be a member of the undefeated football team at Kincaid Rural High School in 1944. He was allowed to finish the season before reporting for duty in the Army. Aaron lived his whole life south of Kincaid on the farm until moving to Iola in 2013 and then into Greystone Assisted Living in December of 2019. He was a member of Kincaid-Selma Methodist Church and the VFW. One of his greatest pleasures in life was spending time with his grandkids and watching their various school activities. Aaron is preceded in death by his parents; brothers, Warren, Ray and Paul Hosley; and son-in-law, David Bedenbender. Aaron is survived by his wife; three daughters, Karon and Randall West of Colony, Kansas, Diane Bedenbender of Iola, Kansas, and Teresa and Lynn Cramer of Arkansas City, Kansas; grandchildren, Eric West, Ryan West, Blake West, Brooke Connell, Trent Bedenbender, Jana Malone, Brent Stalnaker, and Darick Stalnaker; several great-grandchildren; and numerous other family members and friends. A private graveside service will be held to honor the life of Aaron. On Friday, November 20, 2020 Aaron will lie in state at Feuerborn Family Funeral Service from 9:00 A.M. to 4:00 P.M. Memorials in honor of Aaron are suggested to Kincaid Fair Association and may be left with Feuerborn Family Funeral Service in Iola, Kansas. Condolences for the family may be left online at www.feuerbornfuneral.com. Condolences for Sandra Hosley may be sent to 14313 SW Arkansas Road, Colony, Kansas 66015 in care of Karon West.

The family of Aaron Hosley created this Life Tributes page to make it easy to share your memories.

Send flowers to the Hosley family.