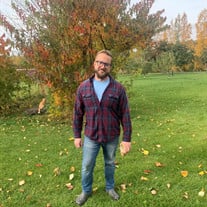 Aaron Clark, age 35, of Palmer, Alaska, passed away on Saturday, April 17, 2021, in Garnett, Kansas. Aaron "Cap A" Clark, was born July 29, 1985, in Shawnee Mission, Kansas, and grew up in Wellsville. He was active in Scouts, theater and FBLA and enjoyed comics and gaming. Upon graduation from Wellsville High, he joined the Army. Aaron served a tour in Iraq and served as Chemical Operations Specialist in Darmstadt, Germany. Combing his talent for medical skills and love of adrenaline, he later became a paramedic and thrived on the variety and intensity of this career. Aaron was happiest in the outdoors, with a green thumb that stretched from his garden to his jungle of house plants. After getting out of the army, this passion led him and his spouse, Jessica, to Alaska as newlyweds, where they avidly hiked, fished, paddled and explored. When their two amazing kids came along, he passed these adventures along to them - spending summers with a Little in the pack as he trekked. He also discovered a love for preserving, brewing and fermenting nature's bounty - filling the cellar with homemade wines, pickles and cider to be shared. Treasuring their time with and memories of Aaron are his wife and children, Jessica, Leoti and Wyatt Clark of Palmer, Alaska; parents, Pat and Leesa Sands of Garnett Kansas; nephews and nieces Alex, Alyss, Benjamin, Rydia, Jonah, Sydney and Paisley; siblings/their spouses, Hesper and Tyler Gloshen, Alan and Jennifer Sands, Shawn and Leann Sayler; in-laws, Sally and Jim Beach, Deanna, Corey and Benjamin Beach; as well as numerous friends and extended family. A Memorial Service will be held at 2:00 p.m., with visitation to follow until 5:00 p.m. on Thursday, April 22, 2021, at Troyer 's Prairie Gold, 1561 S. Maple, Garnett, Kansas. The family invites you to bring a photo and or a written memory to help build a memory book. The family requests that Covid guidelines are followed, masks and social distancing are required. You may send your condolences to the family at www.feuerbornfuneral.com.

Aaron Clark, age 35, of Palmer, Alaska, passed away on Saturday, April 17, 2021, in Garnett, Kansas. Aaron "Cap A" Clark, was born July 29, 1985, in Shawnee Mission, Kansas, and grew up in Wellsville. He was active in Scouts, theater and FBLA... View Obituary & Service Information

The family of Aaron EugeneLee Clark created this Life Tributes page to make it easy to share your memories.

Aaron Clark, age 35, of Palmer, Alaska, passed away on Saturday,...

Send flowers to the Clark family.