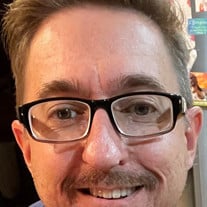 On April 26, 2021, AJ opened his eyes to see Jesus. He passed in his new, favorite chair (that he didn't get to enjoy nearly enough) with his wife by his side. Aaron Eugene Jones was born on November 14, 1978 to Godly parents, Stanley and Glenda Jones, and two doting sisters, Becky and Rachel. In his family of five, they all taught him about God, family, and music. At the age of twenty-two he got off the music road, and started working at Silver Dollar City, and attending First Baptist Church of Kimberling City. It was during this time, he met his devoted wife, and where their love story and family began. After years of not knowing what he wanted to do when he grew up, he felt God calling him into full-time ministry. This calling is where his life ended and was fulfilled. In his many years of music ministry, gospel ministry, and truck ministry he met a lot of people who saw Jesus through him. Even though his public ministry was important to him, his family ministry was just as important. He leaves behind a wife, Erin and four kids, Aidan, Gavin, Reylynn, and Brynnan; parents, Stanley and Glenda (Dixon) Jones of Hartville, Missouri; sister, Rebecca and husband, Layne, and niece, Lauryn Lercher of Waynesville, Missouri; sister Rachel and husband, Kent, and nephews, Rio and Dre Woolston of Branson, Missouri; parent-in-laws, Michael and Charlotte Hampton of Guy, Arkansas; sister-in-law, Toni, best-brother-in-law, James Talley, nephew Jason and wife, Catherine Harvey, nephews, Josh Harvey and Justin Talley, and niece Jordan Talley. He praised in life, and we will praise in death at 2:00 P.M. on Friday, April 30, 2021 at the First Baptist Church in Iola, Kansas. Family will greet friends for one hour prior to the service from 1:00 P.M. to 2:00 P.M. at the church. In lieu of flowers, memorials in honor of AJ are suggested to the AJ Jones Memorial Fund and may be left with the funeral home or mailed to 1883 U.S. Highway 54, Iola, Kansas, 66749. Condolences for the family may be left online at www.feuerbornfuneral.com.

On April 26, 2021, AJ opened his eyes to see Jesus. He passed in his new, favorite chair (that he didn't get to enjoy nearly enough) with his wife by his side. Aaron Eugene Jones was born on November 14, 1978 to Godly parents, Stanley and... View Obituary & Service Information

The family of Aaron "AJ" Eugene Jones created this Life Tributes page to make it easy to share your memories.

Send flowers to the Jones family.